Yeah, now she’s gone crazy. But I really had beer for dessert. I even had it for breakfast. And was still driving my car afterwards.

No, don’t worry, everything is fine with me.

They are tasty and healthy. Oh, I know there will be many men and women telling me that “real” beer IS very healthy, too. However… my beer doesn’t taste like beer at all. Okay, I admit it: It’s a fake. It’s a dessert that looks like beer. Like real beer.

And I love it. I don’t like “real” beer though. YES, I am living in Germany and I don’t like beer. It’s possible. 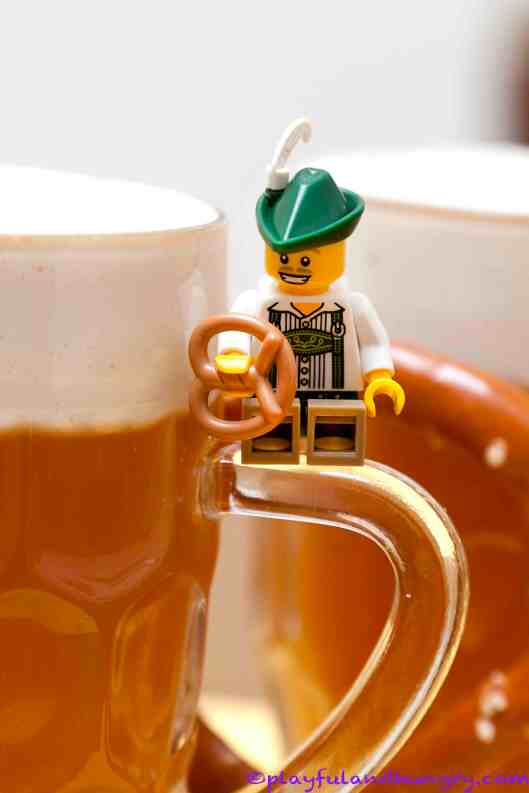 And so does the little Bavarian. (Honestly, I never thought I’d have use for him!)

Pour the apple juice in a pot and add the agar agar and the cinnamon, using a whisk. Boil the juice for about 2 min, stirring constantly. Pour into beer glasses and let it cool down until firm.
Whip cream and put it on top of your “beer”, it well be the “head”.
Enjoy.

It’s a perfect dessert for any Oktoberfest party. Or just for fun. At first sight, my friends really thought I was having beer!

Well, they should know me better… I’ve just been playing with my food.
Enjoy the dessert beer with a pretzel! (Aren’t those lego pretzels cute? I like it…)

© Playful and Hungry, 2013. Unauthorized use and/or duplication of this material without express and written permission from this blog’s author and/or owner is strictly prohibited. Excerpts and links may be used, provided that full and clear credit is given to Playful and Hungry with appropriate and specific direction to the original content.
Loading Comments...