It’s getting warm! Summer is almost here – even where I live!

And that means… it’s time for ice cream! Oh, I have so many ice cream ideas, I’m really glad that we finally have the right temperatures for ice cream and popsicles!
Actually, rhubarb is a spring vegetable. Yeah, that’s right, it’s a vegetable, not a fruit. And a pretty healthy one, too. If this was a health blog, I could tell you a lot about it’s benefits, like the high amounts of dietary fiber, it’s vitamin B, A and K content, antioxidants and calcium. But this is just a playful blog, so you don’t even have to let people know that they are eating a healthy treat…

… cause nobody will notice. They taste that good! 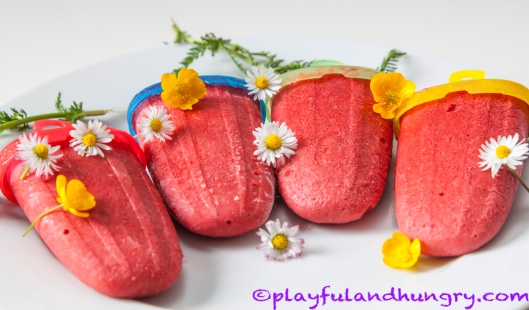 Mix all the ingredients in your blender. Fill in popsicle forms and freeze for about 6h or overnight.
Enjoy!

* NOTE: If you add sugar/xylit or not depends on your own sweet tooth and on the sweetness of your strawberries which varies a lot! When you try the mixture, it should be slightly over sweetened, because the frozen mixture always tastes slightly less sweet. 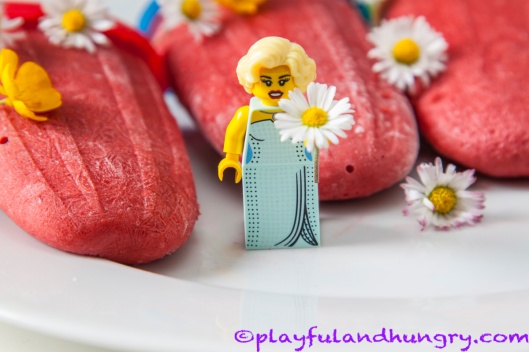 And you have to hurry up to make this treat – rhubarb season is almost over!!! It usually lasts until the end of june. 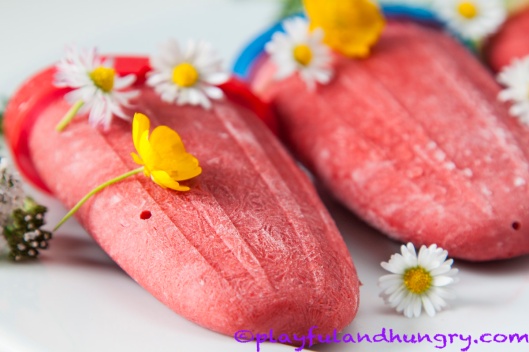 Don’t worry, I won’t do too many reviews on this blog. However, every now and then you might see one on here. I love trying new tools (or toys, as I usually call them!) and sometimes I just like to tell you something about them.

So today it’s the Sedona dehydrator.

I got my Sedona from Keimling and I’ve been able to test it for 8 weeks.
When I got the package, I was surprised how big the Sedona actually is! Of course, I’ve read the measures, but still. We just have a small kitchen which was pretty crowded once I set up the Sedona!

The Sedona looks more elegant than the Excalibur dehydrators. With it’s glass door, it rather seems to be a small oven. Well, it is a small oven, after all. A raw food oven!

I’ve never tried a dehydrator before. So, of course, when I first tried it out, I was very enthusiastic. I spend hours in the kitchen to fill each of the nine trays when I dehydrated for the first time! When the Sedona was finally running, I was completely exhausted. This tool must be a full time job!

I’ve tried quite a few things. I guess it’s best to stop talking and to show you some pictures! 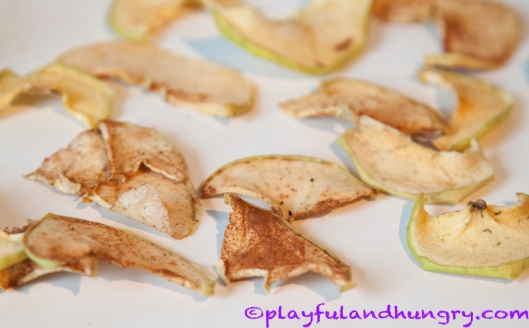 Apple chips. One of my basics and a dehydrator classic. You simple cut apples into thin slices and dry them for about 20h. I also tried coating them with cinnamon and another even sweeter version coated with agave syrup and cinnamon. Each version tasted great to me. I recommend using really tasty, organic apples. They will yield the greatest flavor when dehydrated! 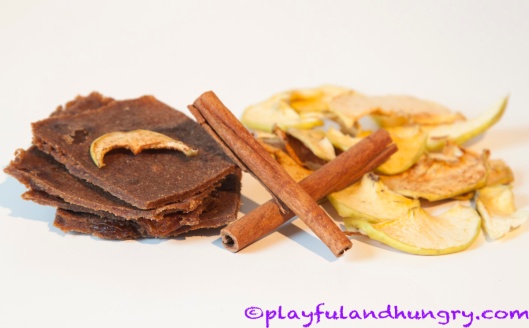 I did quite a few apple things. I do like apples. And we usually have lots of apples at home. My very favorite dehydrator bread was Apple Cinnamon Raisin bread from Amber Shea‘s great book “Practically raw“. What I love most about the book is that unlike many other raw food books, it’s not dogmatic! Amber doesn’t try to tell you that cooked food will kill you – or something like that. She simply gives you some really nice and practical (of course ;) ) recipes and even offers cooked options. The apple cinnamon raisin bread is moist and aromatic. Making this bread is also a great way to use up almond pulp from making almond milk! 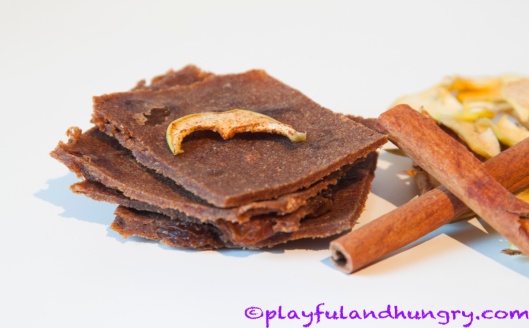 Close up view! This is actually the one and only dehydrator bread that I’ve made several times. With all the other breads, I’ve always tried new flavors and varieties. 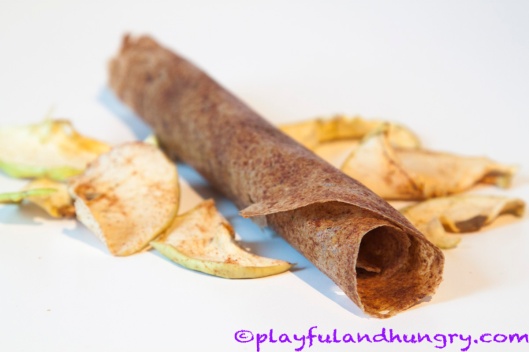 Last apple recipe, I promise! These apple wrappers were really good though! And very convenient. You can quickly make a snack or even lunch with those. I usually filled them with some sprouts, like mung beans, lentils and alfalfa (or whatever I was growing at that time), added some avocado, salt, pepper and lemon juice – that’s it. And I even got a recipe for you.

Place the apples in the bottom of a high-speed blender. Add the flax meal, salt, and water. Blend until smooth.
Spread the mixture evenly onto one lined Dehydrator tray, forming circles. Make them as big or small as you want. Dehydrate for 4 to 6 hours at 104°F / 42°C  or until completely dry.

As you see, I even had some help when rolling them up! I wish I had as much help when cleaning up… 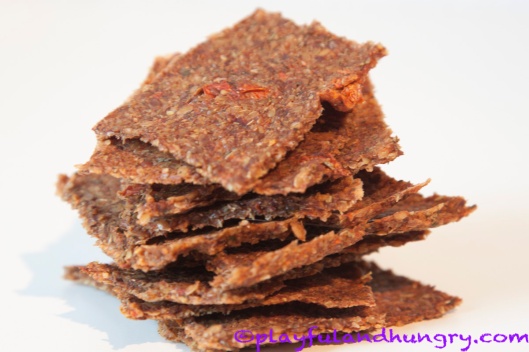 The last thing I want to show you is a variation of another classic, flax seed crackers. For these, I used a tomato instead of water in the batter and added chopped sun dried tomatos, salt, pepper and italian herbs. A great savory snack. 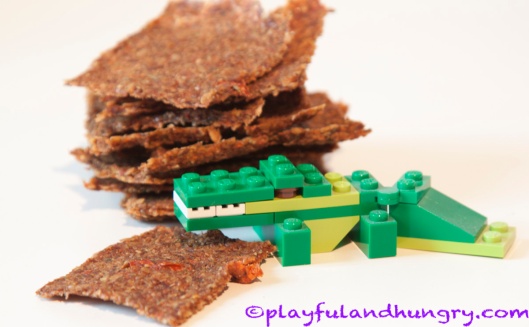 Seems like I’m not the only one who liked those.
I tried quite a few flax seed cracker variations, using different vegetables and spices to create different flavors. First, I copied recipes from books and from the internet, but after a short time, I started creating my own flavors, like those tomato crackers. It’s always the same basic technique, so creating your own recipes really isn’t hard!

There are many more things I tried. I dehydrated Carrot slices, mushrooms, banana, pear, zucchinis,… there’s hardly any fruit or vegetable in this house that was not dehydrated once. Zucchini chips with herbs or different spices were also a great snack. Sadly, I could not try the famous kale chips because kale was already out of season when I tested the sedona. However, I dehydrated kohlrabi leaves with different coatings, starting from olive oil and salt and ending with cashew cheese sauce. It was a great alternative with a decent flavor.

Conclusion
1. One thing I learned: You have to be patient when dehydrating. Opening the dehydrater every 30min won’t help. Well… I’m not the most patient person in the world, what should I say… ;)

2. Dehydrating needs preparation, time and planning. I only used the sedona when I had a few days of or at the weekend. Filling all the trays was more work then expected, especially at the beginning!

3. Another thing a learned: A dehydrator is a nice toy. Yes, I actually really think it’s a toy. It’s nice to have, you can make some “gourmet raw food” – but it’s no must have (other than my vita-mix =D ). At first, you have a little “honeymoon” with your dehydrator. You use it a lot, try many different things… but even during those eight weeks I noticed that I didn’t use the sedona as often as in the beginning. Well, life is busy, you know. And quite often, it doesn’t really fit my lifestyle. I like to decide spontaneously on what to eat. I don’t know if I really still want a raw burger after 12 hours of dehydrating. I mean, raw burgers taste good. But there are so many fresh things that taste good, too.

4. You should take care not to eat too many dehydrator foods. Unlike fresh fruit and veggies, they also dehydrate your body. So at least, you have to drink a lot when eating dehydrated foods. However, it’s all about the right amounts for you. You’ll have to find out yourself. And if you listen to your body, you’ll notice what it needs.

I’m pretty sure that I’ll buy a dehydrator one day. It’s a fun way of preparing food and you can make some tasty and healthy treats! It’s no “must have”, but “nice to have”. However, a smaller dehydrator would be more appropriate for our flat.
If you ever have a chance to borrow a dehydrator – do it! It’s a great way to find out whether you really need it or whether you’d just stop using it after the “honeymoon”.

© Playful and Hungry, 2013. Unauthorized use and/or duplication of this material without express and written permission from this blog’s author and/or owner is strictly prohibited. Excerpts and links may be used, provided that full and clear credit is given to Playful and Hungry with appropriate and specific direction to the original content.
Loading Comments...
Comment
×